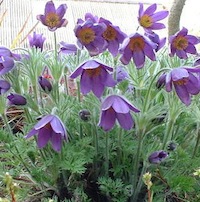 Pulsatilla  Pratensis is native to central and eastern Europe, from southeast Norway and western Denmark south and east to Bulgaria. The plant is poisonous, but has been used medicinally since ancient times. It was proved by Hahnemann in  1805, and is used to treat a wide range of conditions, including respiratory, digestive and gynaecological disorders. It is also a principal constitutional remedy, corresponding to a particular personality picture, usually female.

Especially, in diseases of women and children.

Women inclined to be fleshy, with scanty and protracted menstruation (Graph.).

The first serious impairment of health is referred to puberic age, have "never been well since" - anaemia, chlorosis, bronchitis, phthisis.

Pains: drawing, tearing, erratic, rapidly shifting from one part to another (Kali bi., Lac c., Mang. a.); are accompanied with constant chilliness; the more severe the pain, the more severe the chill; appear suddenly, leave gradually, or tension much increases until very acute and then "lets up with a snap;" on first motion (Rhus).

Thirstlessness with nearly all complaints; gastric difficulties from eating rich food, cake, pastry, especially after pork or sausage; the sight or even the thought of port causes disgust; "bad taste" in the morning.

Mumps; metastasis to mammae or testicle.

Derangements at puberty; menses, suppressed from getting feet wet; too late, scanty, slimy, painful, irregular, intermitting flow, with evening chilliness; with intense pain and great restlessness and tossing about (Mag. p.); flows more during day (on lying down, Kreos.).

Delayed first menstruation. Sleep: wide awake in the evening, does not want to go to bed; first sleep restless, sound asleep when it it time to getup; wakes languid, unrefreshed (rev. of, Nux).

Threatened abortion; flow ceases and then returns with increased force; pains spasmodic, excite suffocation and fainting; must have fresh air.

Toothache: relieved by holding cold water in the mouth (Bry., Coff.); worse from warm things and heat of room.

Unable to breathe well, or is chilly in a warm room.

Nervousness, intensely felt about the ankles.

Relations. - Complementary: Kali m., Lyc., Sil., Sulph. ac.; Kali m. is its chemical analogue. Silicea is the chronic of Pulsatilla in nearly all ailments. Follows, and is followed by, Kali m. One of the best remedies with which to begin the treatment of a chronic case (Cal., Sulph.). Patients, anaemic or chlorotic, who have taken much iron, quinine and tonics, even years before. Ailments: from abuse of chamomile, quinine, mercury, tea-drinking, sulphur.

Aggravation. - In a warm close room; evening, at twilight; on beginning to move; lying on the left, or on the painless side; very rich, fat, indigestible food; pressure on the well side if it be made toward the diseased side; warm applications; heat (Kali m.).