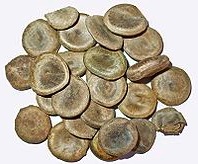 The Strychnine tree (Strychnos nux-vomica L.)  is a deciduous tree native to India. A well known poison, it was used from the 17th century as a digestive and nervous stimulant. Small doses are diuretic, increase appetite, and aid digestion. However, its use in crude form is dangerous, since a dose of only 30 - 120 mg can be fatal.

Nux Vomica was proved homeopathically by Hahnemann in 1805. It proved to be a major homeopathic remedy. Boericke calls it "the greatest of polychrests, because the bulk of its symptoms correspond in similarity with those of the commonest and most frequent of diseases. It is frequently the first remedy, indicated after much dosing, establishing a sort of equilibrium of forces and counteracting chronic effects."

Disposed to be quarrelsome, spiteful, malacious; nervous and melancholic.

"Nux is chiefly successful with persons of an ardent character; of an irritable, impatient temperament, disposed to anger, spite or deception." - Hahnemann.

Anxiety with irritability and inclination to commit suicide, but is afraid to die.

Hypochondriac: literary, studious persons, who are too much at home, suffer from want of exercise, with gastric, abdominal complaints and costiveness; especially in drunkards.

One of the best remedies with which to commence treatment of cases that have been drugged by mixtures, bitters, vegetable pills, nostrums or quack remedies, especially aromatic or "hot medicines." but only if symptoms correspond.

Tendency to faint (Nux m., Sulph.); from odors; in morning; after eating; after every labor pain.

Cannot keep from falling asleep in the evening while sitting or reading hours before bedtime, and wakes at 3 or 4 a. m.; falls into a dreamy sleep at daybreak from which he is hard to arouse, and then feels tired and weak (reverse of, Puls.).

Catarrh: snuffles of infants (Am. c., Samb.); coryza, dry at night, fluent by day; < in warm room, > in cold air; from sitting in cold places, on stone steps.

Eructations: sour, bitter, nausea and vomiting every morning with depression of spirits; after eating.

Nausea: constant; after eating; in morning; from smoking; and feels "If I could only vomit I would be so much better.".

Stomach: pressure an hour or two after eating as from a stone (immediately after, Kali bi., Nux m.); pyrosis, tightness, must loosen clothing; cannot use the mind for two or three hours after a meal; sleepy after dinner; from anxiety, worry, brandy, coffee, drugs, night watching, high living, etc.

Constipation; with frequent unsuccessful desire, passing small quantities of faeces (in upper abdomen, Ign., Ver.); sensation as if not finished.

Alternate constipation and diarrhoea (Sulph., Ver.), in persons who have taken purgatives all their lives.

Menses: too early, profuse, lasts too long; or keeping on several days longer, with complaints at onset and remaining after; every two weeks; irregular, never at right time; stopping and starting again (Sulph.); during and after, < of old symptoms. Labor pains: violent, spasmodic; cause urging to stool or urinate; < in back; prefers a warm room.

Relations. - Complemenatary: Sulphur in nearly all diseases. Inimical: to, Zinc.; must not be used before or after. Follows well: after, Ars., Ipec., Phos., Sep., Sulph. Is followed well: by, Bry., Puls., Sulph. Nux should be given on retiring or, what is better, several hours before going to bed; it acts best during repose of mind and body.

Amelioration. - In evening, while at rest; lying down, and in damp, wet weather (Caust.).