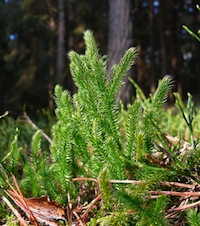 Globally widespread, like many club mosses, Lycopodium was used medicinally by herbalists as early as the middle ages. The spores were used in the 17th century as a treatment for kidney complaints. The extensive curative properties of Lycopodium were revealed by Hahnemann when, in 1828, he proved the remedy and discovered it's wide-ranging applications in homeopathic form. Lycopodium is one of the three major antipsoric remedies, along with Sulphur and Calc Carb.

Irritable; peevish and cross on walking; ugly, kick and scream; easily angered; cannot endure opposition or contradiction; seeks disputes; is beside himself.

Weeps all day, cannot calm herself; very sensitive, even cries when thanked.

Dread of men; of solitude, irritable and melancholy; fear of being alone (Bis., Kali c., Lil.).

Diphtheria; fauces brownish red, deposit spreads from right tonsil to left, or descends from nose to right tonsil; < after sleep and from cold drinks (from warm drinks, Lach.).

Constipation: since puberty; since last confinement; when away from home; of infants; with ineffectual urging, rectum contracts and protrudes during stool, developing piles.

Red sand in urine, on child's diaper (Phos.); child cries before urinating (Bor.); pain in back, relieved by urinating; renal colic, right side (left side, Berb.).

Dryness of vagina; burning in, during and after coition (Lys.); physometra. Discharge of blood from genitals during every stool.

Foetus appears to be turning somersaults.

Hernia: right sided, has cured many cases especially in children.

Pneumonia; neglected or maltreated, base of right lung involved especially; to hasten absorption or expectoration.

Relations. - Complementary: Iodine. Bad effects: of onions, bread; wine, spiritous liquors; tabacco smoking and chewing (Ars.). Follows well: after, Calc., Carbo v., Lach., Sulph. It is rarely advisable to begin the treatment of a chronic disease with Lyc. unless it is clearly indicated; it is better to give first another antipsoric. Lyc. is a deep-seated, long-acting remedy, and should rarely be repeated after improvement begins.

Amelioration. - Warm food and drinks; from uncovering the head; loosening the garments.